As I already explained in the previous posts, basically Fuelino increments the fuel injection time by a specific period (defined in %), based on how the calibration maps are set (using the calibration tool). In particular, the maps are 2: one map defines the increment (%) depending on the engine rotation speed (rpm); the other map defines the increment (%) depending on the Throttle Position Sensor value (10 bits, 0-1023). The injection time increment percentage is the sum of the values calculated based on these 2 maps. A deeper explanation is available at this link.

Today, I will focus the attention on the first map, which is called incrementi_rpm[] inside the SW. In this map, there are 8 calibrate-able elements (%), each one referring to a specific break-point (rpm). Practically, in order to reduce the calculation burden (Atmel ATmega328p cannot perform divisions quickly), I decided to use the "delta time" between 2 injection starting points, as break-point, instead of rpm. These values corresponds to the time ticks (4us) measured by Timer1 between 2 engine rotations (2 consecutive injections), and it is inversely proportional to the engine rotation speed (the more the engine rotates fast, the less time is required to perform 2 rotations). For example, at 1200rpm, engine performs 2 rotations in 100ms, so the Timer1 will measure 25000 ticks; at 12000 rpm, Timer1 will measure 2500 ticks only.

Once each injection is commanded by the original ECU (for example, Keihin on Honda CBR125R), Fuelino calculates the "delta time" (2 engine rotations) between the present injection and the previous one, and checks, using incrementi_rpm[], which is the proper injection time increment (%) to use. Each element of the map is 1 byte (0 = 0%, 255 = about 50%), and can be calibrated using Serial connection with Fuelino Calibration Tool. For "delta time" measured values between 2 break-points, Fuelino uses linear interpolation, to calculate the proper increase percentage, as shown below. The graph below shows the increase (%), incrementi_rpm[], which is a function of "delta time" (time between 2 injections), which is inversely proportional to the engine rotation speed (rpm). The inverse proportionality to the rpm is the reason why in the following graph, between 2 rpm breakpoints, the mathematical curve is hyperbolic, and not linear (as should be for direct proportionality). Also, in the following graph, the thin curve shows the theoretical curve, while the blue circles show the empiric data measured when feeding Fuelino input with a simulation signal, and measuring its output command with Pico DrDaq. As you can notice, there is a pretty good correspondence. It must be noticed that, from theoretical point of view, for each calibration point, since 1 byte is used (to reduce RAM consumption), and since 256 would theoretically correspond to a 50% increment, the calibration resolution is 0.195%. Other small errors might be caused by interrupt execution timings, and so on, which affect the injection time accuracy, in relative terms, especially for low injection timings (example: 10us error at 500us pulse is 2%, but at 5000us injection pulse it is just 0.2%). 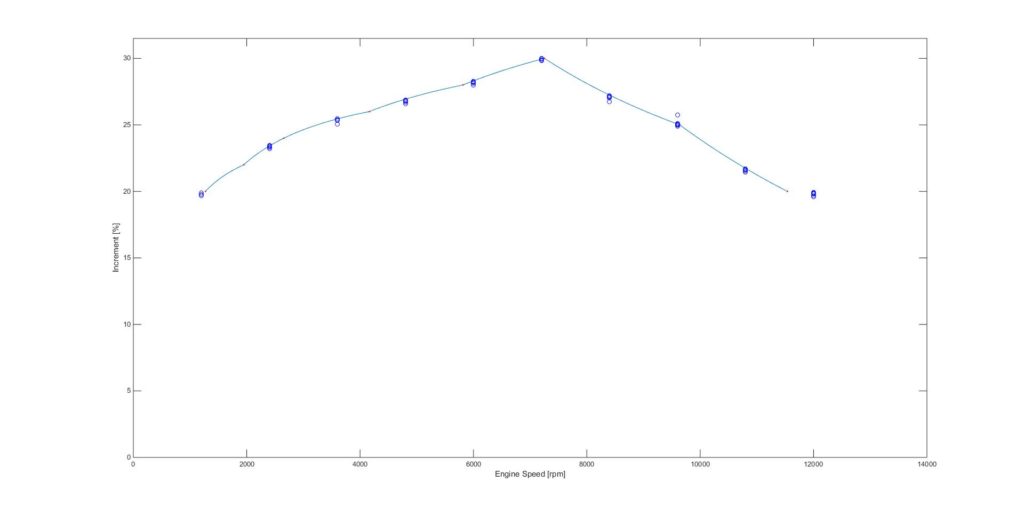 In order to perform the validation activity of the maps interpolation algorithm, I used Pico DrDaq to feed Fuelino with a probing injection signal (simulating the original ECU), and at the same time I acquired the injector command signal output by Fuelino. I created a fully automatic tool for that purpose, using Visual Studio 2013 and Pico DrDaq libraries. The tool feeds Fuelino with many injection signals at different rpm and injection periods; then, it measures Fuelino output command period, and determines how much is the percentage of increment that Fuelino is outputting. All empirical data is available here: 20170111_incrementi_rpm_export, and the measured points are shown in the picture above, as blue circles, as well as in the screenshots below. 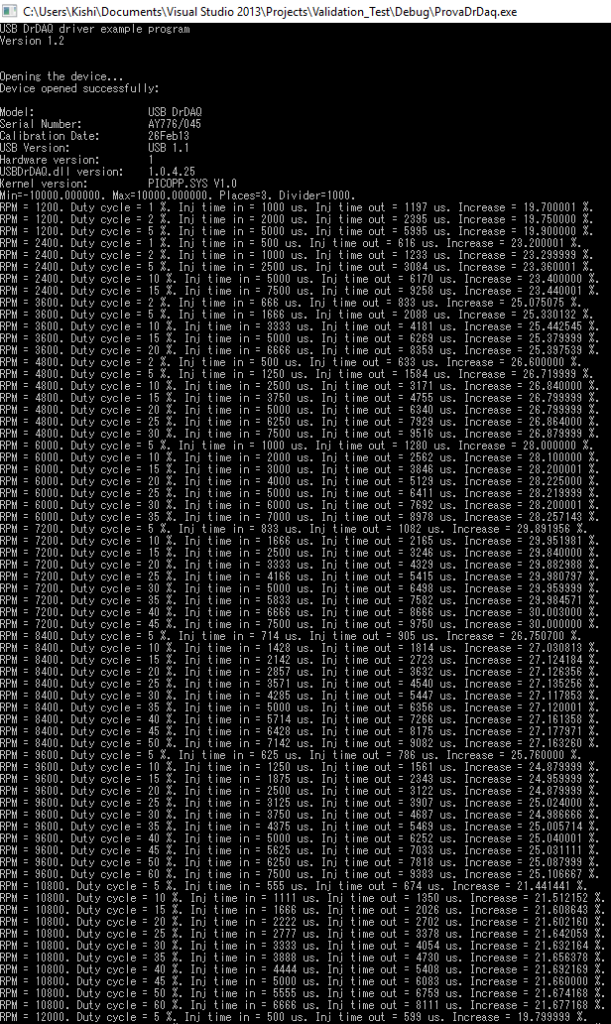 Empirical data obtained. This is the report (CSV file) automatically generated by the validation tool.

The map breakpoints (Timer1 ticks) are fixed inside the software (as "consts" values), and a modification needs to compile the software again. However, it is something that rarely has to be performed. You can use the standard breakpoints, unless you want to personalize them. In order to simplify the division (ATmega 328p cannot perform division operation), and transform it into a simple bit shifting operation, there is one limitation: the distance between one map break-point and the next should be a multiple of 2. Doing so, when interpolating, the division by "delta x" (distance between 2 breakpoints) becomes a simple binary bit shifting operation. I also created an Excel file which may help, in the extreme case in which you would like to change the breakpoints: 20170110_incrementi_rpm_breakpoints.

After deciding how much you want to increase the injection time (%) for each "delta time" (engine speed, rpm) break-point, all you need to do is to write and test these values into Fuelino, which is very simple: using Fuelino Calibration Tool, via USB serial communication protocol, it is possible to read and write the calibration maps written in Fuelino, as visible in the screenshot below (right side). Each calibration change is at first memorized only in RAM memory ("Write RAM"); in order to write the complete map into the EEPROM, so that it will still remain after power OFF, you need to click on "Write EE". I implemented this rule in order to avoid writing too many times on the EEPROM, since it reduces the EEPROM lifetime. You should at first try new calibrations "on the fly", by saving them in RAM memory. Once you are sure about the calibration map (they are working well on your engine), you can click on "Write EEPROM", and the calibration map will be stored permanently in the EEPROM.

Now, the question is: "how do I calibrate the maps"? The answer is complicated. You should have at first a "starting point" idea. For example, in my case, I upgraded from 125cc Honda original cylinder, to a 166cc Athena bore up kit. Therefore, since roughly 30% more air will enter the engine (at full throttle open), you should set a similar fuel increase percentage (30%) as tentative value. Practically, this value will not be good for all rpm, and for all throttle values. I expect that, for example, at high rpm, the air intake efficiency will be slightly lower, for example only 20-25% more, due to pressure losses (the intake duct and valve size did not change). And also, at low throttle, I would expect a lower increase. You should play with the values in the map(s), and check the engine behavior, color of the smoke (white = too much air, black = too much gasoline), and tune your motorcycle until it has the best performances. By the way, you don't need to be very precise, since the original ECU (example: Keihin on CBR125R) will still have "close loop control" active, which is using the lambda sensor signal to correct the fuel injection time; therefore, even if you make a small mistake, for example + or - some percentage points, the original ECU will cover this error.