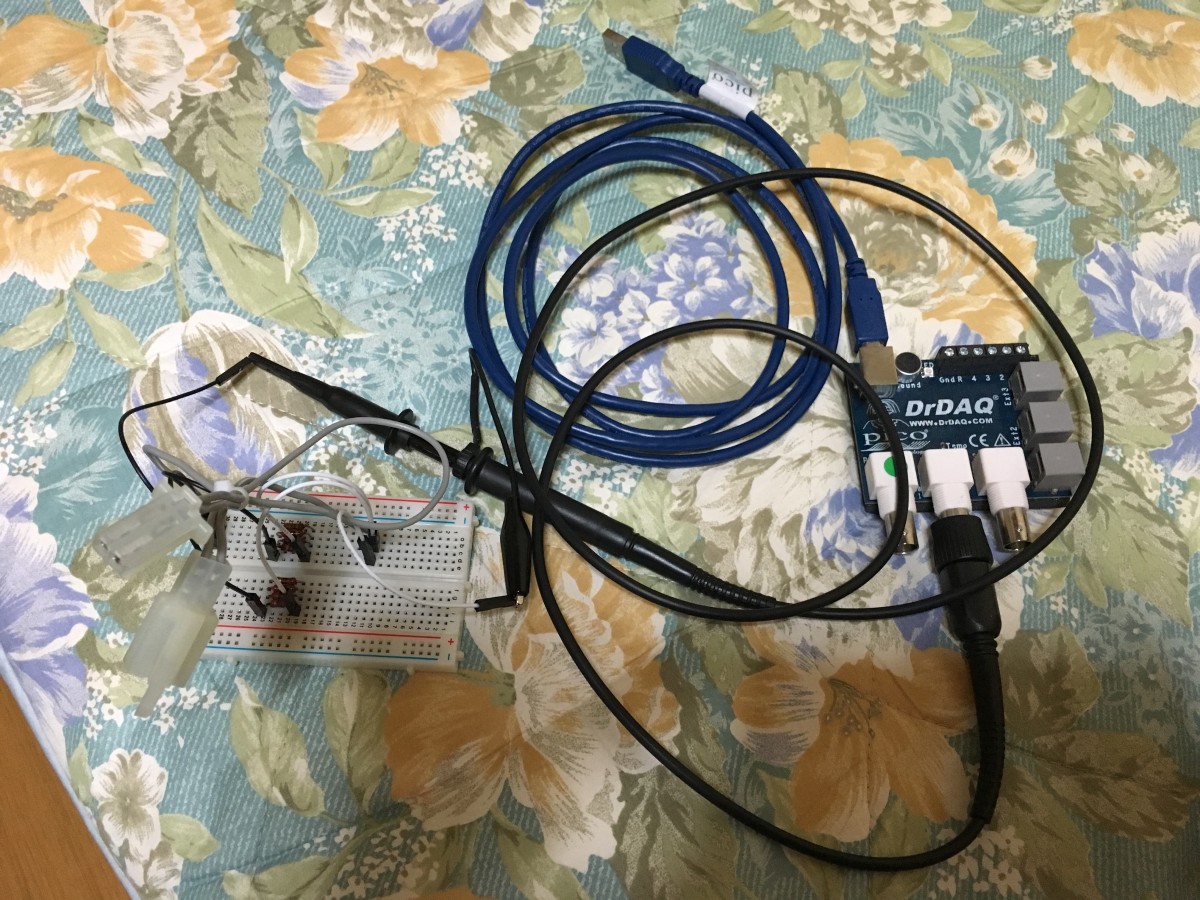 As you've probably already read in other posts, I created by myself an additional DIY ECU module, which I use to interface the original Honda ECU to the fuel injector. The reason why I added an ECU to regulate the injection timings is that I installed a bore up kit (166cc), which is requiring more air, and so more fuel is needed in order to maintain the proper stoichiometric air-fuel mass ratio. For this purpose I used an Arduino Micro microcontroller, which is reasonably cheap (around 3000 Yen, 23 Euro) plus some additional electronic components. The ECU is located under the passenger's seat, as you can see below. The open connector below, is the one which connects the additional DIY ECU to the fuel injector.

Today, I will show how you can measure the voltage and current flowing in your motorcycle's injector. This procedure is valid not only for a Honda CBR125R; it is a general procedure which you can apply to mostly every motorcycle injector. First of all, you need an oscilloscope: I used a Pico DrDaq oscilloscope, which I bought at Akizukidenshi, in Akihabara (Tokyo, Japan), for just 12,800 Yen (90 Euro). This oscilloscope has only 1 generator channel, plus 1 voltage measurement channel, and some other inputs/outputs that I have never used. Since there is only 1 measurement channel, I had to measure current and voltage separately.

First of all, let's see how the injector driving circuit of the ECU looks like. The injector is controlled ON/OFF by using the pin 12 of the Arduino Micro. It might seem stupid to say this, but I want to clarify: it is not possible to power the injector by directly using the digital output of the Arduino: first of all, the injector has a resistance of just 8-12Ω, which means that, assuming a nominal voltage of 12V, the injector electric current absorption is about 1A (Ampere); Arduino max current for each pin is just 20mA, which makes it barely capable of controlling a small relay. And also, an Arduino Micro outputs a 5V voltage, while the injector needs to work with battery voltage (nominal 12V). For this reason, the Arduino pin 12 signal is connected to an N-channel power MOSFET and to a pull-down resistor (100kΩ). As a power MOSFET, I decided to use a FKI10531, since it accepts high drain-to-source maximum voltages (up to 100V): considering that when the injector opens, the drain-to-source voltage can be also 60-70V, having a high maximum voltage was mandatory. And also, it can accept a maximum forward current of 18A (much higher than 1A required in this application), and the forward resistance Rds(ON) was reasonably low (54.5 mΩ max.). The datasheet can be download here: FKI10531.

In order to limit the voltage and discharge the energy accumulated in the inductance, at the time of injector opening, I used a network of resistors (56Ω) and Zener diodes (24V). Probably, using so many resistors (5) and Zener diodes (10) is not necessary, but I decided to over-size the circuit in order to avoid to destroy Zener diodes, due to overheating. In fact, the Zener diode (GDZJ24D) that I am using has a Zener voltage of 24V, and can dissipate only 500mW of power. Supposing only one Zener diode, and no series resistance, and considering an injector current of about 1A, when the injector opens, the Zener diode would have to dissipate, for a limited time (let's say, few hundreds of microseconds) a total power of 24W (24V and 1A); considering that, at 12000rpm (max engine speed, worst case), each injection happens every 10ms (12000 rpm means 200 rotations per second, which are 100 combustion cycles considering a 4-stroke engine), a discharging time of, for example, 300us, would mean a 3% duty cycle with 24W peak power (this means an average dissipated power of 0.74W): this power would break the Zener diode for sure. So, due to my incomplete knowledge of the injector inductance and real discharging time, I decided to take a "safe margin" and this is the reason why I decided to split the discharging power between 10 Zener diodes (5 lines, with 2 Zener diodes and 1 resistor each). The datasheet of the Zener diode can be found here: GDZJ24D datasheet.

First of all, I measured the injector voltage by connecting the reference pin of the oscilloscope (GND) to the motorcycle chassis, and the signal pin to the injector (-) pin, which also corresponds to the drain pin of the power MOSFET. The maximum input voltage of the oscilloscope is just 10V, so I had to reduce the signal amplification by setting the probe attenuation to "x10". The signal which I measured during engine cold idling, is as following.

Injection phases can be resumed as following:

By analyzing the above screenshots, it is possible to calculate some useful info of the injection.