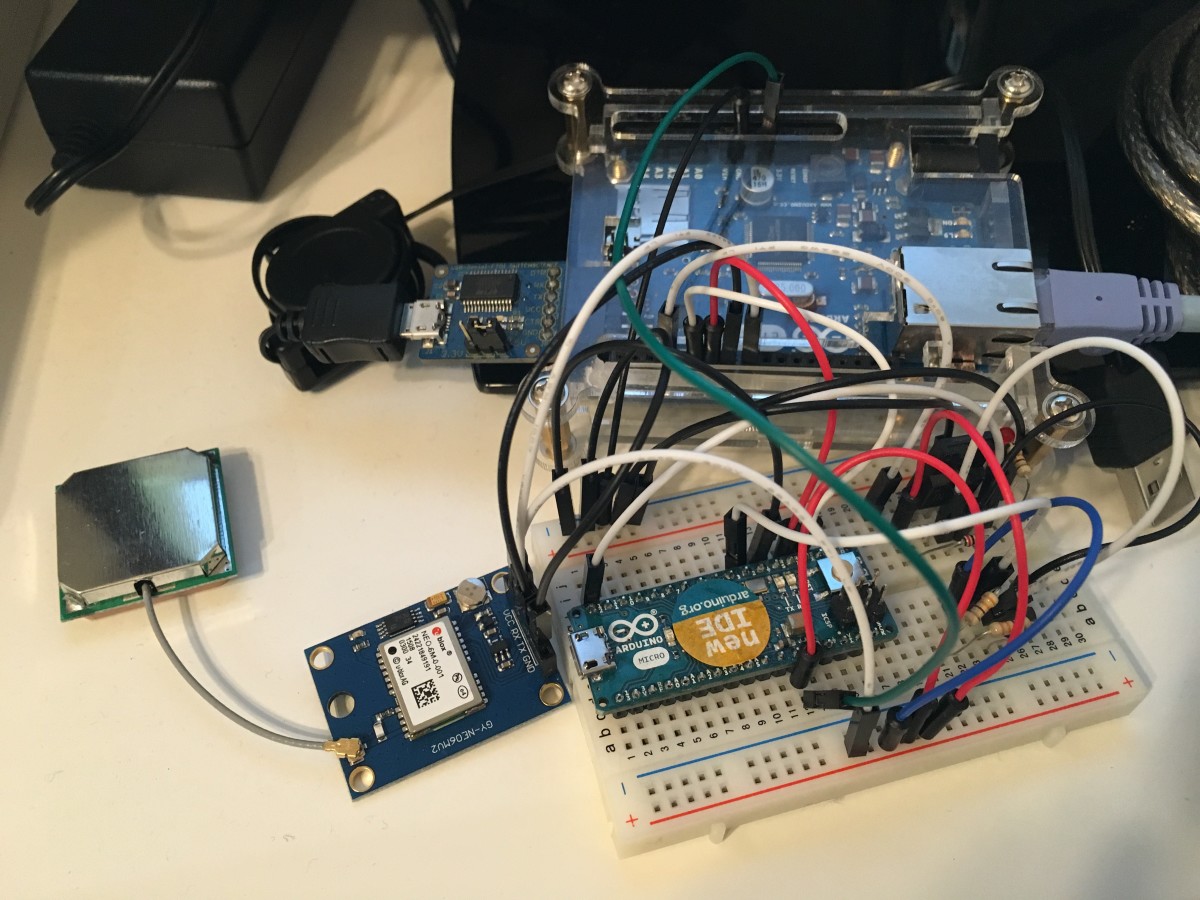 It is possible to read, and log GPS data, such as time, position, speed, and so on, using an Arduino microcontroller plus an U-blox NEO-6M GPS receiver.

For my test, I used an Arduino Ethernet and a U-blox NEO-6M GPS, which I bought on Amazon Japan for 2,580Yen (about 17 Euro), a very cheap price.

On Arduino side, I used the pins 7 (RX) and 8 (TX) and the Software Serial Library. In fact, the Arduino built-in serial port (0=RX, 1=TX) was already used for the communication with the PC. In the picture below, pins 3, 5 and 6 are also connected to an other Arduino Micro, but these pins are not used in this sketch.

The following Arduino sketch is continuously polling, once in a second, data from the GPS receiver. In order to poll GPS data, the command PUBX,00 is used (this is a proprietary command of U-blox). The received data is then forwarded to the PC serial connection, and visualized on the screen.

I removed part of the information, for privacy (otherwise you would know exactly the coordinates of the place where I live). The message forwarded to the PC is as below (instead of "xxxx" and "yyyy", the latitude, longitude and height positions were received). The original message received by the GPS receiver has a "$" at the beginning, and a "*" at the end (before the checksum). I used these 2 character to understand when the message starts and when it ends. The data which Arduino sends to the PC is only the characters between "$" and "*" (I did not implement any checksum check at the moment).

By default, the NEO-6M outputs RMC, VTG, CGA, GSA, GSV, GLL messages once a second (these are standard NMEA messages). Since I wanted to receive the info by polling message (i.e. not automatically, to avoid Arduino sofware serial reception overloading), I first had to disable the automatic sending of the messages (for example, for RMC, this can be done by sending to the GPS receiver the command: $PUBX,40,RMC,0,0,0,0*47). This configuration is performed at the first loop execution. The software then polls the info (time, position, speed) by using the proprietary $PUBX,00*33 request.

The complete protocol explanation for the NEO-6M GPS receiver can be downloaded here: u-blox6 Receiver Description Protocol Specification. The official manual explains which are the NMEA standard messages (ASCII codification) supported, and also the details of the proprietary UBX protocol (binary codification). The explanation of the message $PUBX,00 can be found at pages 68-70. In the next article, I will show how you can use Arduino Ethernet to log GPS data on the SD memory, and then transfer it to the PC.